Today I’m happy to welcome author Pat Jeanne Davis as she shares history behind her book and an excerpt from When Valleys Bloom Again. Read through to the end to find out how you can enter her giveaway.

While conducting research for my novel, I came across fascinating information that added an element of depth to the story.

In the partial scenebelow from When Valleys Bloom Again, our soldier, Jim Wright, and other allied soldiers who stormed the Normandy beaches struggled through enemy lines. Thousands died instantly or were severely injured. Their recovery and rehabilitation was made possible with a new life saving medicine.

I discovered a connection between my hero’s hometown in West Chester, PA and the production of penicillin. The history of penicillin ranges from its discovery in 1928 by the Scot, Alexander Fleming, and its subsequent development in the 1930’s by British scientists Howard Florey and Ernst Boris Chain to a laboratory in Pennsylvania’s Chester County, “the mushroom capital of the world,” where it so happens our hero Jim lived and worked prior to being drafted by the US Army.

Granville Raymond Rettew, a Pennsylvania chemist and mycologist (expert in fungi), followed with interest the research carried out in Britain during the early 1940’s. The barrier to date was the difficulty of stabilizing the drug and producing it in sufficiently large quantities. Through his experiments Rettew demonstrated the antibiotic properties of ‘spawn’ extracted from the mushroom. Later, in collaboration with the American pharmaceutical industry he pioneered a method for the production of penicillin on a massive scale.

By D-Day millions of doses of the drug were made available for the treatment of Allied forces, saving many from infection, crippling injury, and death.

READERS, Pat has offered to give away one print copy of When Valleys Bloom Again to a commenter to commemorate this historical event. Leave a comment below to be entered.

As war approaches in 1939 Abby Stapleton’s safety is under threat. Her father, a British diplomat, insists she go back to America until the danger passes. Abby vows to return to her home in London—but where is home? With her family facing mortal danger so far away and feeling herself isolated, she finds it hard to pray or read the Bible. Did she leave God behind in war-torn London too? Abby becomes friendly with Jim, a gardener on her uncle’s estate.

Jim can’t get Abby out of his mind. Did she have a sweetheart in England? Was it foolish to think she’d consider him? He curses his poverty and the disgrace of his father’s desertion and drunkenness haunts him. Can he learn to believe in love for a lifetime and to hope for a happy marriage?

Abby couldn’t know the war would last a long time, nor that she would fall in love with Jim—soon to be drafted by the U.S. Army—or that she’d have to confront Henri, a rejected suitor, determined by his lies to ruin her reputation and destroy her faith in God’s providence. Will she discover the true meaning of home and find happiness with Jim? 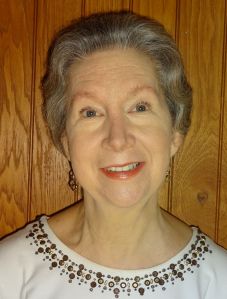 PAT JEANNE DAVIS lives in Philadelphia, Pa with her British-born husband, John. They have two grown sons. She enjoys flower gardening, genealogy research and traveling with her husband. Pat has published essays, short stories and articles online and in print. She has a keen interest in mid-twentieth-century American and British history, particularly the period of World War II. Pat’s father-in-law served in the British Eighth Army during the war. When Valleys Bloom Again is her debut historical romance set in that era. She is a member of the American Christian Fiction Writers and the Historical Novel Society. Pat loves to hear from her readers. Subscribe to her newsletter here http://www.patjeannedavis.com

When Valleys Bloom Again can be purchased here;

In remembrance of the Normandy Invasion that occurred 75 years ago today.

Excerpt from When Valleys Bloom Again

At 0730 on D-Day, Corporal James Wright burst from the navy transport. Top-heavy from the gear in his pack, he crashed head first into seven feet of icy cold water, two hundred yards offshore. In the high swells, his thrashing pushed him further down. His eyes smarted from the acrid mixture of sea salt and diesel fuel that gushed from ruptured fuel tanks. After groping in an eternity of terror, Jim’s helmet broke surface, and he felt sand beneath his boots. On the beach, he dropped onto his belly, ripped off the life jacket, and rushed forward.

In the cacophony about him, one trooper after another fell dead under the cannonade from the German revetments on the hills above. Shells from the Allied destroyers lying offshore whistled and slashed through the canopy of smoke and flame, exploding in concert, knocking him flat. Nearby a buddy from his squad writhed in pain, tangled in the jagged metal of a half-destroyed tank trap. As Jim got closer to him, the soldier raised two fingers and motioned for a cigarette. Dear Lord, have mercy. Jim didn’t carry any. It would have made no difference. There was nowhere to put it.

Resuming a crouched run, Jim headed for the crest of a hill. He pushed up the endless hill, dodging like a manic dancer. As flares burst overhead, lighting up the sloping terrain, Jim reached the barbed wire at the top. He pressed his body against the soft ground, making himself small. Prying up the wire with the snout of his rifle, he tried to slide under, but the barbs snagged his jacket, and he panicked. Months of training ought to have prepared him for this. After a few frantic gyrations, he freed himself and hurtled on through the incessant hail of fire. Others raced alongside him, a surging, shouting, lunatic mass intent on suicide.

He scurried through a low hedge and lay still, panting. The outline of a small building rose out of the battle smoke. He made for it, skittering across the field, bobbing and weaving to make himself an elusive target. On reaching the half-demolished structure, he dived over a mound of rubble. The roof was open to the sky, affording scant refuge. Jim flattened against a fragment of the outer wall, its old bricks held firm by ancient mortar, the handiwork of a long-dead farmer for whom these skies had threatened only rain. As the whine of ordnance from the Allied ships grew louder, the thud, thud, thud of German artillery responded in an endless barrage.

Here in the thick of it, Jim had no yardstick to measure success or failure. A thousand shall fall at thy side, and ten thousand at thy right hand; but it shall not come nigh thee. As a lad, this Bible verse had been impressed on him by his mother. He’d never really understood. What danger faced a young boy? Buddies of his, good men, Christian men, had been blown to smithereens in seconds. What kind of a promise that he, Jim Wright, would be kept safe? He could not believe this, and yet, somehow, he did take comfort from it, willing himself to accept that somewhere in the vast unknowable web of the universe such protection did exist. That there was, after all, a Higher Purpose, something that could make sense of this vulgar conflict that threatened him and the people he loved.

Posted on June 6, 2019, in Uncategorized. Bookmark the permalink. 4 Comments.