Today I’m happy to welcome author LeAnne Hardy as she shares how she got the idea for her series. Read through to the end to find out how you can enter her giveaway. 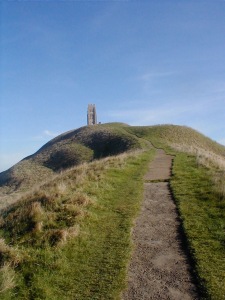 Father Dunstan turned his face toward the steeply rising Tor. ìLike a pilgrimage to Jerusalem!î he said. (p. 87)

Ever since reading Tennyson’s Idylls of the King and hearing the Broadway recording of the musical Camelot in high school, I have loved all things King Arthur. Mary Stewart’s series, beginning with The Crystal Cave, shaped my concept of my own faith as I saw Arthur as a type of Christ, the great King to whom I owed my full devotion.

On a trip to England my husband and I visited Glastonbury, the traditional site of Avalon where Arthur received his sword Excalibur from the Lady of the Lake and where he went for the healing of his wounds following his last battle. From there (according to legend) he will return at Britain’s greatest hour of need. Sound familiar?

For almost a thousand years a Christian monastery was located at the foot of Glastonbury Tor, a strange conical hill, reported to hold the gate to the Celtic underworld. King Henry VIII closed that monastery and all the others in England as part his reformation of the church—more an excuse to divorce Queen Katherine who had failed to give him a son than any doctrinal commitment. The final days of the monastery were full of drama, and on that visit to Glastonbury, a story began to form in my mind that had little to do with King Arthur!

In Glastonbury Tor, book one in the resulting Glastonbury Grail series, Colin flees home after trying to kill his abusive father. In the abbey treasury he discovers an ancient olivewood cup that just might be the Holy Grail, brought from Jerusalem by Jesus’ tin merchant uncle, Joseph of Arimathea, after Jesus’ death and resurrection. The cup reveals the power and glory of God in those tumultuous days as the king attempts to crush the abbey. In book two, Honddu Vale, Colin returns home to reconcile with his father, but the cup remains dull and empty as Colin experiences God’s silence and his father shows no sign of repentance. At the end of the book, an old witch pulls the cup from the ruins of a fire.

When I wrote that final scene, I meant it as a suggestion that Colin’s faith had grown to a point where he no longer needed the physical manifestation of God’s presence. But one of my readers wrote, “I can’t wait to find out what God is going to do with Teg.” The more I thought about it, the more excited I got about writing the witch’s story.

Black Mountain, book three in the Glastonbury Grail series and my most ambitious work yet, released June 1. The series is carefully researched historical fiction. Glastonbury Tor was a finalist for a Christy Award in that category. But you will love how the supernatural is made real as God pursues his wayward daughter. 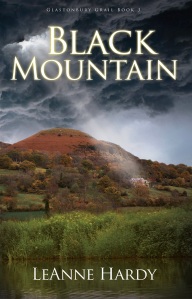 Ol’ Teg o’ the Hills is determined to master this thing of power, but it may master her.

Teg has the cup that Colin Hay brought back to Wales from Glastonbury Abbey in England. When the Grandmother spirit she has served since childhood rejects both the cup and Teg, the old witch sets off on a journey to find the origins of the cup and learn the secret of its power.

Alice Thatcher is eager to wed her Colin. When the old woman she knows as Goody Tegwyn appears in Meare, Alice takes her under her wing and adopts her as the mother she has never known. Alice loves Colin with all her heart, but love may not be enough to fulfill her duties as the wife of a gentleman. How far will Alice go to give Colin an heir? When Goody Tegwyn returns to Honddu Vale, can Alice save her from her enemies?

If you were forced to flee, where would you go? Comment below to be included in a drawing for a free copy of Black Mountain. (Electronic only if you live outside the US) Come back tomorrow to find out more about the role of books and the skill of writing in this story and comment again to double your chances. 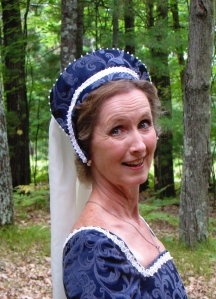 Bio: LeAnne Hardy has lived as a missionary librarian in six countries on four continents. Her inspirational fiction comes out of her cross-cultural experiences and her passion to use story to convey spiritual truths in a form that will permeate lives. Click here to hear her speak about the significance of King Arthur in her spiritual formation and read from the first two books. Links to first chapters of all her books can be found here.

Blog: My Times and Places

← Author Spotlight with Davalynn Spencer ( + Giveaway )
The Magic of the Written Word — LeAnne Hardy ( + Giveaway ) →
%d bloggers like this: